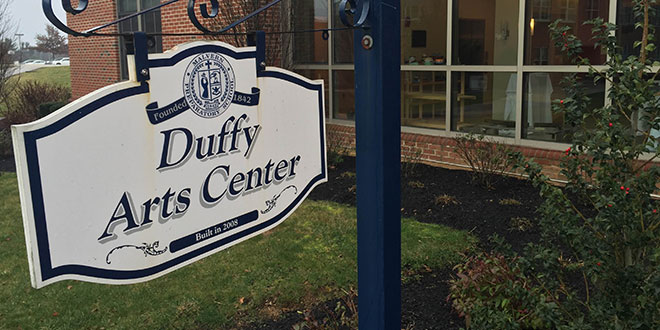 Who was the man behind the Duffy Arts Center?

In the early 1970s, Malvern was failing. Malvern was not only destroying itself, but it had started to deplete the resources of the Augustinian provincial.

Malvern was only a 9th-12th grade institution at the time, and only about 220 students attended Malvern.

Over the next decade, Father Duffy nearly doubled the enrollment.

Father Duffy grew up in Upper Darby with his two brothers. He transferred to Malvern for his junior and senior years after two years at West Catholic High School. He became a graduate of the Class of 1948.

After graduation, Fr. Duffy went up to a Novitiate Farm in upstate New York. For one year, at the Novitiate farm he learned to pray with around 25 other Augustinians. Upon completion of his Novitiate year, he moved back to the area to study Philosophy at Villanova. Later, in 1957, Father Duffy was ordained.

It was during that time that Fr. Thomas Meehan and Mr. Rich Roper first met Fr. Duffy. Following his stint at Bonner, he became a full-time counselor for the Augustinian Provincial of St. Thomas Aquinas, where he served under the leadership of Fr. Castle.

Fr. Duffy returned to Malvern in 1973 as Headmaster (currently titled Head of School.) For 23 years he held this position.

“This school that exists today is directly a result of his vision and leadership,” Mr. Stewart said.

Duffy headed the admissions department in keeping the school afloat, and taking it from 250 students to almost 600 students at his passing in 2006. Some faculty noted that Duffy was rarely at Malvern, but this was only because he was consistently working to acquire students for the school. He would do whatever it would take to help Malvern. He would go to house visits, local events, and parishes to spread the Malvern name.

His recruitment of students to Malvern was so successful that in 1978, he was able to expand the school, and reintroduce the 7th and 8th grades to Malvern. Later, in 1986, he brought back 6th grade to Malvern.

Duffy led two major fundraising campaigns. He started the first B.A.S.H. event, and through his first fundraising campaign, funded what is now the O’Neill Sports Complex, Stewart Hall, and The Melton Rowing Center. With his second fundraiser campaign, starting in 1997, he was able to get the funds for the 29,000 square foot Duffy Arts Center.

In 1990 he became the first President of Malvern, and was assigned the task of managing all operations for the school. In 1992 he led the creation of the second Strategic Vision for the school. This strategic vision focused on creating a family type atmosphere at Malvern that would later become “brotherhood,” as coined by Father Flynn.

Fr. Duffy had a deep love for athletics, but his love for activities did not stop there.

“He never missed a show, and when he was going to miss one he made sure to attend a dress rehearsal,” said Mr. Roper, who directed the Malvern Theatre Society for 34 years. According to Roper, Duffy was one of the biggest supporters of the arts and music, despite never being the most artistically inclined.

Duffy took Malvern out of the rough years, and grew the arts programs simultaneously. So, naturally, when the time came to decide the naming of the building, Fr. Duffy was a prime candidate. After the Board of Trustees meeting, where it was decided that the new arts building would be named after him he came out “with the biggest smile,” Mr. Roper said.

Fr. Duffy was more than just a leader to the people he encountered.  “He always made people feel good about themselves,” Fr. Flynn said. “He laughed a lot, he smiled a lot, and made people feel that they were important.”

In Mr. Roper’s life, “he was a major formative influence as a teacher, parent, and person.”

“Fr. Duffy would say that the drip of blood [in the Augustinian logo] represented Augustinians going as far as they could to help everyone with their problems,” Mr. Stewart said.

One common theme throughout every discussion about Fr. Duffy was that he made them feel like the most important person in the room. Fr. Thomas Meehan experienced this during his time at Bonner. Fr. Duffy knew his name, despite never speaking to him once, and having roughly 600 other students. Regardless of the occasion, Fr. Duffy tried his best to help everyone he could.

Fr. Duffy passed away on January 9, 2006, at the age of 74. This week is the tenth anniversary of his passing.