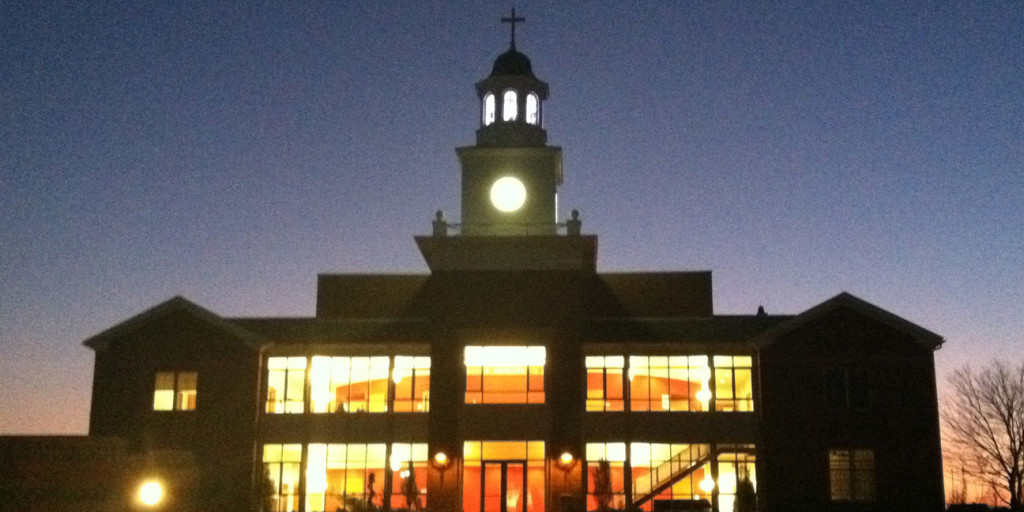 From Tolentine, to Stewart, back to Tolentine, and finally to Duffy— the Malvern arts program has finally found its home.

On Saturday, January 9, Malvern celebrated the life of Malvern’s former President Fr. David Duffy and the tenth anniversary of his passing.

“He was the lighting rod that saved the school in ‘74,” Board Chairman Mr. Stephen K. Cloetingh said.

Fr. Duffy cast the deciding vote to keep the school open in the 1970’s. Without him, Malvern Prep may not have survived a period of declining enrollment and financial struggles.

Today’s students never attended Malvern under Fr. Duffy’s leadership, but they still remember him as they pass by the the Duffy Center sign everyday.

One attendant of the anniversary celebration remarked that Fr. Duffy would not know the difference between a ballet and an orchestra. But, Fr. Duffy always recognized the arts’ importance to Malvern.

When current Arts Department Leader Ms. Jackie White was hired in 1995 to help build the arts program, she described the upper school arts as “kind of glorified baby sitting.”

Arts classes did not have a strict curriculum, and students did not come to class consistently. Students would come in if they wanted to and draw or do other arts activities.

The theatre program was nearly two decades ahead of the art program. In 1976, Fr. Duffy hired current English Teacher and College Counselor Mr. Richard Roper to run the program, which was “previously unorganized.”

Malvern wanted to build an arts program to rival other schools in the area, according to White. To achieve this, White created a ten year plan.

The plan commenced on the top floor of Tolentine with a small 15-person orchestra and a developing visual arts program. The program soon needed more space – and more arts classes.

Tolentine was very different from what it is today. When Malvern used to be a boarding school, Tolentine housed the dormitories. When the arts program moved into its halls, the rooms were very narrow and the hallways were wide. Classes soon became crowded, according to White.

Malvern decided to renovate Tolentine two years after the arts moved in, and the program temporarily stayed in Stewart Hall. One year later, the renovations were complete with visual arts on the top floor and the orchestra on the bottom floor.

Despite the renovations, White said the new conditions were less than ideal.

“It was crazy,” White said. ”It wasn’t soundproof. As soon as any music was played you could hear it all the way up to the top floor.”

White worked with other teachers and current Assistant Head of School Mr. Steve Valyo on shaping the curriculum, and bringing in more teachers.

“We started hiring people that have a love for the arts,” White said, “and I think that started selling it.”

Del Pizzo started Malvern’s Jazz band and Liga improved the choral program. The theatre program grew to having up to two hundred students from Malvern and other schools in a single show, according to Roper.

“It kind of broke down barriers where people thought that arts were only… for certain people, and it started being more accepting,” White said.

In 2005, the final year of White’s ten year plan, a new idea surfaced – a new building to be the epicenter of the arts. Sure enough, The Board of Trustees decided to build it.

White’s plan did not account for the new building. “It was never in the cards,” White said. “It was unbelievable.”

Despite White’s surprise, former President Mr. James Stewart said the timing of the building was appropriate.

“We had told Ms. White back in ‘95-’96 to do a ten year plan, because I thought in ten years we would grow out of that [the previous facilities] – and we did,” he said.

The project was estimated to cost 11 to 12 million dollars and have an overall footprint of 36,000 square feet. Once the Board of Trustees approved it, Malvern needed to start fundraising, according to Stewart.

The first step of the fundraising process was the Quiet Phase. In this phase, Malvern tries “to raise significant dollars from a small group of people— people who can give a seven figure gift,” Stewart said.

At the end of the Quiet Phase, Malvern had raised over seven million dollars. Then it opened up the fundraising to the rest of the school and outside community. The rest of the donations were still being gathered while the building was still under construction, according to Stewart.

To design the building, Malvern hired Voith & Mactavish Architecture firm. According to White, the architects were very open to input from Malvern and the arts department.

“Everyone had input for every aspect,” White said. “I had input where every outlet would go.”

“I was told by Mr. Stewart to dream big and see what happens, and that’s what I did,” Roper said.

He wanted a trap door on stage, a full fly system to pull backdrops completely out of view from the audience, sophisticated lighting, and more.

One of the concerns about moving to a larger building would be a decrease in intimacy and connection between each of the parts of the arts department. To combat that, teachers suggested incorporating a lot of windows, according to White.

The project did not come without setbacks. The total building came in over budget at 14 million dollars and the footprint shrunk to 33,000 square feet, according to Stewart.

Vasey Hall had to be torn down because the Malvern Borough did not allow two buildings within 75 feet of each other, according to Stewart. Vasey Hall housed the previous theatre which was built in the 1950s.

“We knew it had to come down because it couldn’t do anything but be a theatre, so we took it down,” Stewart said.

Because the building’s footprint shrank and financial reasons, not every item on the wish list made it into the building.

There were proposals to have the back hallway behind the stage designed to include a black box theatre and the stage to have a trapdoor. The theatre almost had a full fly, where backdrops can be pulled all the way and out of the frame of the audience, but instead had a half fly. There was also a proposal to have a green roof, where sod would be layered on the roof, according to White.

Construction began in the summer of 2006, and Malvern’s newest building opened one year and a half later in January of 2008. Unfortunately, Fr. Duffy never saw the completed building. He passed away in January 2006 — just three months after he found out the building was named after him.

While Fr. Duffy was not there with them, the rest of the Malvern community was able to enjoy their new arts facility.

“Everyone was excited to have that building in,” Stewart said.

With new facilities like a ceramic studio, studio art rooms, a graphic design room, a recording studio, a pit orchestra, dark room, band rooms, and open space for events, “[The Duffy Center] raised the level and the bar of expectation for the students to achieve,” Del Pizzo said.

Almost 21 years and a 14 million dollar building after White first made her ten year plan to build Malvern’s arts program, she still is hoping for the program to expand in one more area.

“To put the icing on the cake, we definitely need to have dance,” she said.

Regardless of what the future holds, Trustee Member and President of the Alumni Association Bryan Forcino said that if Fr. Duffy could see Malvern and the Duffy Center today, “He would be extremely proud and he would say, ‘It’s not necessarily because of the things I did, it’s because of the things great things that we did.’”

Forcino added, “He’d have one of those great Duffy smiles on his face.”